Politics in the Workplace: How to Manage Political Tension Open up social media or watch the news and it's fairly easy to see that Americans are very polarized when it comes to politics. All too often, biases are formed as soon as someone discloses their political affiliation and they are categorized as red or blue, or a donkey or an elephant.

Illustrating this, a PEW survey found more than half of Republicans and almost half of Democrats view members of the opposite political party to be "immoral".  What's more, a pre-2020 election Pew survey found seven out of 10 Democrats wouldn't date a Trump supporter and five out of 10 Republicans wouldn't date someone who supports Hillary Clinton.

With strong beliefs like this, simmering frustrations are bound to quickly boil over in the workplace. 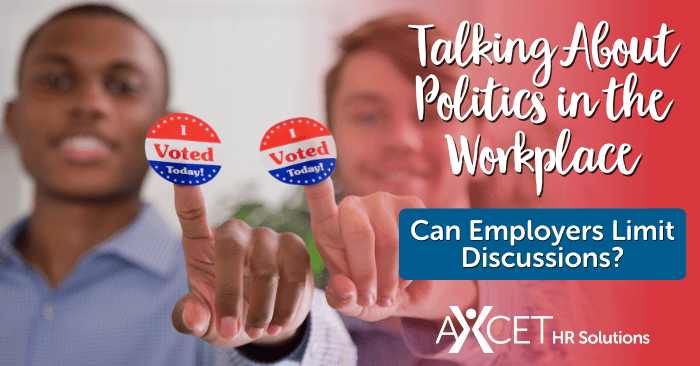 Rate of Political Tension at Work

The amount of U.S. workers experiencing political tensions at work has increased substantially in recent years, according to a Society for Human Resource Management (SHRM) Politics at Work Study. In fact, the study found almost half of the respondents had gotten into a disagreement with a coworker about politics.

Employees often believe the First Amendment gives them the right to say anything they want to at work. This is in fact, untrue. It protects citizens from government action that limits speech, but it doesn’t prevent private employers from restricting political discussion in the workplace.

Are Employers Permitted to Manage Political Conversations in the Workplace?

While you, as a private employer, are permitted to regulate workplace political expression, you do have to be careful not to run afoul of the National Labor Relations Act. Section 7 of the Act allows employees – even those in private, non-union workplaces – to meet for purposes of collective bargaining or other mutual aid or protection. It can be hard to distinguish when regulating political speech crosses the line into what could be perceived as attempting to thwart employees acting together for their mutual benefit.

Say, for example, an employee tells colleagues a preferred candidate will raise the minimum wage and comments about ways such a move could benefit the company’s workers. If it could be argued that a minimum wage increase could, indeed, improve their work environment or their situation as employees, it could be considered protected Section 7 speech.

RELATED: How to Handle Disgruntled Employees >>

Small business owners and managers can’t afford to ignore the potential for employees to get into loud, passionate disagreements about political candidates and positions. And, before an ugly situation bubbles up, they should know tactics to prevent it. Yet a July 2022 Gartner survey found one in four organizations do not provide any of the resources, including tools and training, that employees need to help manage workplace tensions. 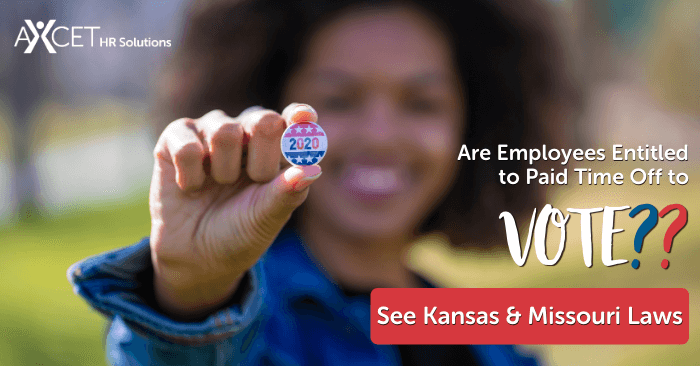 Checklist for a “Political Safe Zone” at Work

While appropriately regulating political speech in the workplace keeps performance and productivity from declining and prevents employee discussions from crossing into bullying or harassment, you can achieve that goal without being heavy-handed. This eight-point checklist will help you maintain a productive and civil workplace:

1. Ask an HR Expert to Guide You in Limiting Discussing Politics in the Workplace

For example, you may want to disseminate a message from leadership to all employees acknowledging the strong political tensions and encouraging employees to maintain a culture of harmony and mutual respect.

2. Train Managers to Recognize When Tensions are Escalating

Managers should be able to recognize and step in to diffuse risky situations by shifting the focus onto company policies that support a cohesive culture. Managers also should be trained to recognize when political conversations tiptoe into protected activity under the NLRA. Missteps in managers’ handling of politically charged discussions can expose the company to legal risk.

3. Remind Employees at All Levels that Disrespectful Behavior Can Result in Disciplinary Action

The rules apply as much for employees who are still working from home as for those who are working at the job site. Follow through by disciplining anyone who doesn’t adhere to the company’s anti-harassment, anti-bullying or anti-discrimination policies.

RELATED: Six Types of Harassment in the Workplace >>

4. Encourage Employees to Say Something if They Witness Political Harassment at Work

Make sure they know how to report such issues. Take every complaint seriously, investigate fully and be ready to take relevant action.

5. Sharing of Political Information Should Be Approved in Advance

Require anyone who wishes to share political information – even something as seemingly innocuous as offering to help colleagues figure out where their polling places are – to get the organization’s permission in advance. Or you may choose to implement a no-solicitation policy that prohibits any distribution of political material at work.

6. Consider Updating Your Dress Code to Include Political Attire

Consider a dress code that addresses political attire employees may or may not wear in the workplace, whether in virtual meetings or on the physical premises. If you apply a dress-code policy, make it all or nothing.

In other words, allowing supporters of one political party to wear t-shirts bearing the preferred candidate’s slogan but preventing the opposite party’s supporters from promoting their candidate, in the same way, could be problematic.

Avoid using your position as “management” to suggest that employees consider voting a certain way “because it would be good for business.” While some states permit employers to make voting recommendations to employees, using intimidation or threats of layoffs to coerce an employee to vote a certain way is both wrong and illegal.

8. Determine if Your Team is Level-Headed Enough to Freely Discuss Politics at Work

In some organizations, employees are level-headed enough to discuss politics with each other without the conversation devolving into an argument. While many employers choose to play it safe by making all political dialogue off-limits, others believe their employee team can talk about politics and stay within appropriate boundaries.

If this is the case at your workplace, allowing open conversation and idea-sharing can enhance all employees’ knowledge and understanding of complex political issues. If your workplace supports such dialogue, consider communicating the boundaries you expect employees to observe.

While good intentions and good policies help, you can’t force employees to avoid political talk at the office if they’re determined to engage co-workers in such discussions. Protect your organization by working with your management and HR teams to create an approach that minimizes risk by focusing on and encouraging a culture of understanding and mutual respect.

Time Off to Vote: Four Employer Guidelines for Election Day 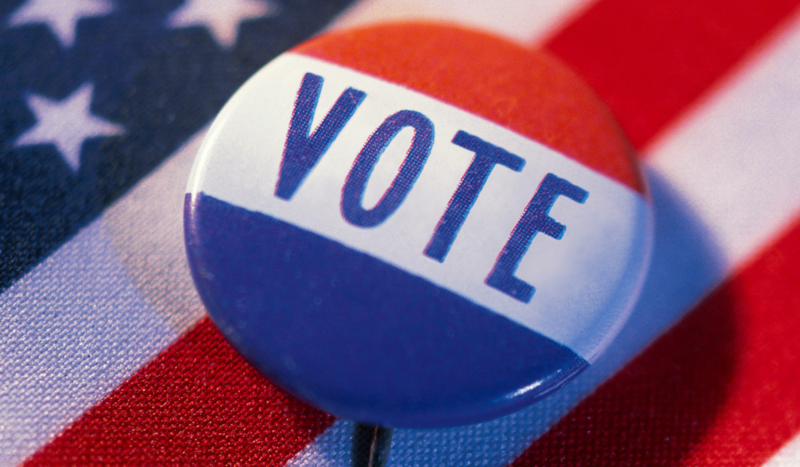